New York-based duo LION BABE (comprised of singer / songwriter Jillian Hervey and producer Lucas Goodman) celebrate the conclusion of their ‘Cosmic Wind’ album’s journey with a three-part video series, including the release of ‘Sexy Please’ official music video on February 17th, ‘Different Planet’ official music video on March 9th, and *To Be Announced* official music video on March 31st in conjunction with the album’s one-year anniversary. These visuals reflect the “mood and feeling of the album. ‘Cosmic Wind’ is about finding one’s self when faced with inevitable change and these visuals bring those ideas to life. They celebrate the quest to be free and are connected with the nature of life along with natural inclination as humans to be imaginative and visualize a beautiful way to move through the world“. 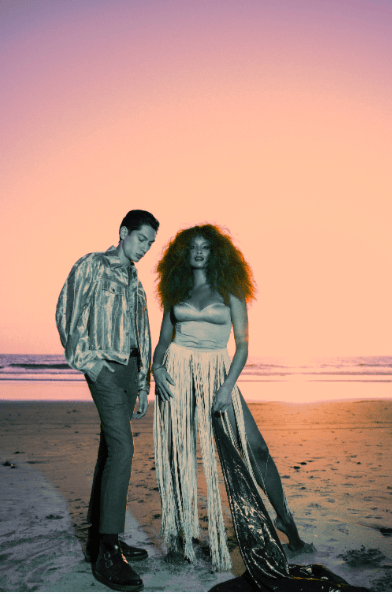 In January, LION BABE released their funky, House take on Nelly’s classic hit ‘Hot in Herre’ and is one of the duo’s “favorite anthems [which] deserves a female reboot. Thankful for The Neptunes and Nelly for sparking the fire in us when we were both getting into music“. The track was tipped as one of the ‘best R&B songs right now’ and shot to the top of Hype Machine’s number one spot within days of its release.

Since 2014, the duo have garnered an impressive music catalog throughout the years, and have collaborated with some music favorites such as rapper / actor Childish Gambino, and house music’s sibling duo, Disclosure, who featured the New York natives on their smash single “Hourglass“, which they performed at huge stages across the world. In 2018, HBO’s original series, Insecure, “Obsessed Like” recruited Lion Babe for their singles “Hit the Ceiling“, and “Just Me“, which were broadcasted for Seasons 1 and 3. Making festival appearances over the recent years at Coachella, AFROPUNK, Glastonbury, Reading & Leeds, Smokin’ Grooves Fest, Amsterdam’s Milkshake Festival, and most recently at Australia’s Wildlands, Beyond The Valley, and Original Fields festivals, LION BABE are set to perform at Lightning In A Bottle in Bakersfield, CA this May 23rd, with more 2020 live dates to be announced soon, off the back of last year’s sold-out US tour and standout London gig!