Set to be pipped as ‘ones to watch’ this year, thanks to not only their double helping of sass and style but their flawless vocals, hypnotic harmonies and addictive blend of sounds, which they describe as ‘pop music with Caribbean flavour’, the exciting music duo BLESSED – made-up of south-east London sisters Loz and Gigi Morgan – have released the visual for their new track ‘Love Me’ (out now on Island Records).

The first single taken from their forthcoming EP, ‘Love Me’ is a stand-out, self-love anthem which touches on their own journey of learning to love themselves in spite of the pressures that society can often present to people trying to find their way. Produced by Samuel Brennan, the uplifting and personal track is further brought to life with a must-see visual, directed by up-and-coming London director and filmmaker Remi Laudat. The clip was shot in and around the band’s native south-east London and features some of their closest family and friends.

Speaking on the new track and its visual, BLESSED said:

“Learning to “love me” is the exact path we are both on. We haven’t reached a place of fully loving ourselves and that’s ok but It’s a journey we feel everyone can relate to especially in our generation. Social media has played a massive part in this as we are constantly comparing ourselves to others’ appearance and lifestyles. We wanted the video to show when we feel most accepting of ourselves, which is surrounded by our closest friends and family when we are our most authentic self. Over the years we’ve learnt that loving yourself isn’t just all appearance based but internal and to us it means being proud of the person you are becoming, growing daily and being kinder to yourself.” 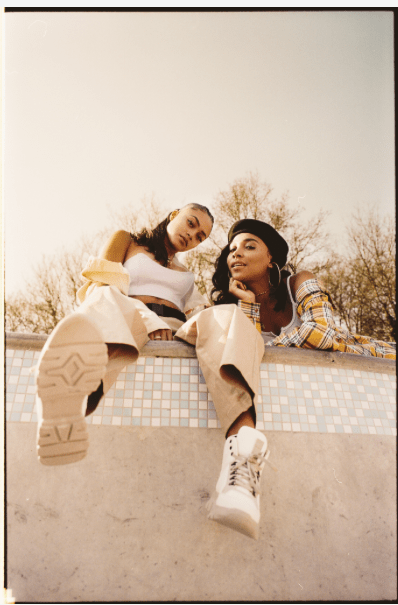 BLESSED will be familiar to music fans, as their talent and unique sound saw them create some serious waves a couple of years back and receiving acclaim from titles such as i-D, Wonderland, Clash, Hunger, Notion, SBTV and more. Catching the attention of the iconic record label Island Records, who they are signed with, the girls have spent the past two years honing their craft and perfecting the authentic, distinct BLESSED sound which sees them drawing on tropical dancehall rhythms, with a sprinkle of sunny Afrobeats, honeyed R&B vocals and south London swagger; perfectly encapsulating the melting pot of London.

Their forthcoming EP features a smart, cheeky collection of sun-kissed tunes touching on topics close to their heart from female empowerment, to relationships and navigating modern life as young women. With more new music set to be unleashed in coming months, listeners across the UK and far beyond are set to be truly BLESSED.