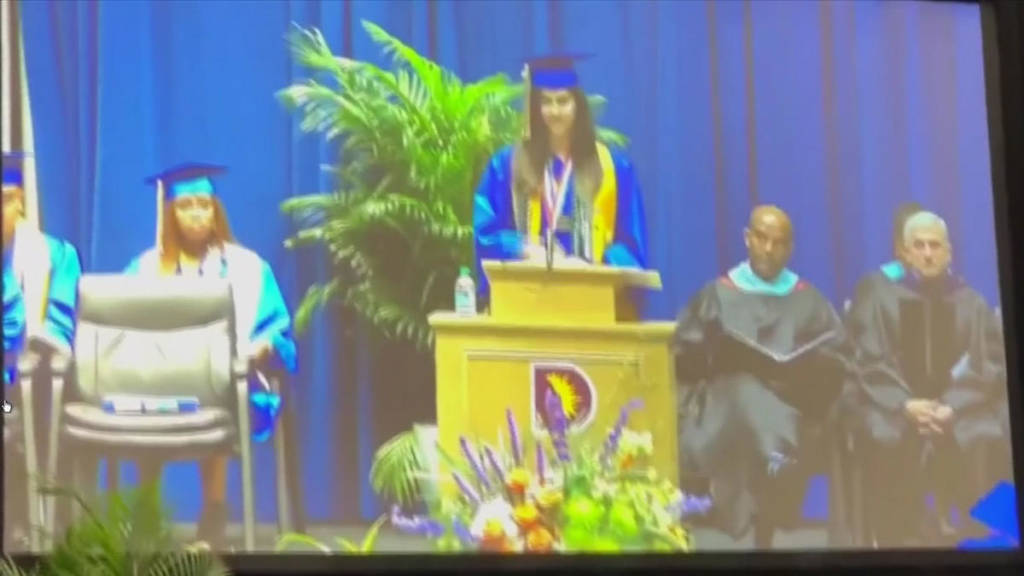 Valedictorian Rooha Hagher said that officials at Emmett J. Conrad High School in Dallas cut her microphone after she spoke out on behalf of black men whose deaths were allegedly caused by racism.

Hagher explained to KXAS that she and her family moved from Iran when she was 12 to escape religious persecution.

“So it felt really surreal just because to think that around 3 years ago and now, I’m here, like, making As, writing essays and now being the valedictorian of my class,” Hagher explained.

She said that as she was writing her speech, she decided to include the names of Trayvon Martin, Tamir Rice and Michael Brown. Civil rights advocates allege that all three men were killed due to the color of their skin.

But when Hagher got on stage and mentioned the slain men, officials cut off her microphone.

“It made me feel sick, honestly, because I was close to their age and knowing this is a reality that black families have to deal with,” she told KXAS.

Hagher admitted that the principal had scrubbed the men’s names from her speech because he did not want it to be political.

“I never expected to be silenced,” Hagher remarked. “The consequences I was expecting to face was them holding my diploma or having a conversation with my principal.”

“I never expected them to not allow me to finish, because at the end of the day, schools want to raise socially conscious students, students who are able to think for themselves,” she added. “That’s what I was doing.”

On Tuesday, Hagher published parts of her speech on Twitter.

my valedictorian speech was cut short because i said the names of black children who had become victims of police brutality. our principal signaled for my mic to be turned off as soon as i said “trayvon martin and tamir rice” and played it off as a technical difficulty. pathetic. pic.twitter.com/9upW3dZ7Mg

since this is getting more attention than i expected, here’s that section of my speech (for context) pic.twitter.com/4dsf865AZk

some more context and background information. i really think my principal did this out of ignorance, and we all have room for growth. i never meant to create more divisiveness, but i also feel like certain conversations need to be had pic.twitter.com/1YOEe8a91d

as an iranian refugee, police brutality is not my narrative to shape. though i appreciate your nice comments, there are activists who have been doing the work and raising awareness about this issue for years. listen to them. support them. (and tag them so we can do the same)

You can also give the news story of said situation a watch below...