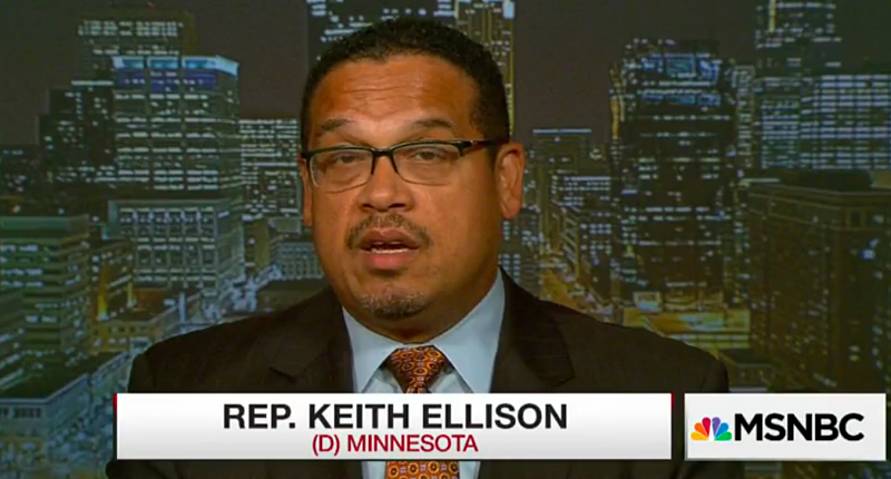 In an appearance on "All In with Chris Hayes", Democratic Rep. Keith Ellison (MN) slammed Republican frontrunner and former reality TV star Donald Trump for setting Americans against each other and irresponsibly ratcheting up hostilities toward Muslims and nonwhites.

“He’s whipping up hatred to scapegoat a minority religious group, which has some very dangerous historic precedents,” Ellison said. “I mean, it’s the kind of behavior, it’s classic demagoguery, and you know, he’s going to get somebody hurt.”

“You just said, he’s going to get somebody hurt — what do you mean by that?” asked Hayes.

“What I mean is that when leaders who have a national platform whip up hate and hysteria against a particular group — particularly a religious group, a minority religious group that is not popular — invariably, you know, the people who are mentally unstable or motivated by hate come out of the woodwork,” Ellison said. “You see desecrations of buildings that are associated with that group, you see assaults, you see murders, you see things, things happen.”

Ellison — who is the first Muslim member of Congress — called Trump a “prolific hater,” and said that “he’s just getting worse. He’s capitalizing on people’s fears, pandering to it, so that’s what I mean by he could get people hurt.”

It could be argued that Trump’s rhetoric is already getting people hurt. In addition to a Black Lives Matter protester who was roughed up at a rally last week, two men in Boston now face hate crime charges after they attacked and beat a homeless man from Mexico.

“Donald Trump was right,” one of the assailants told police at the time of his arrest. “All these illegals need to be deported.”