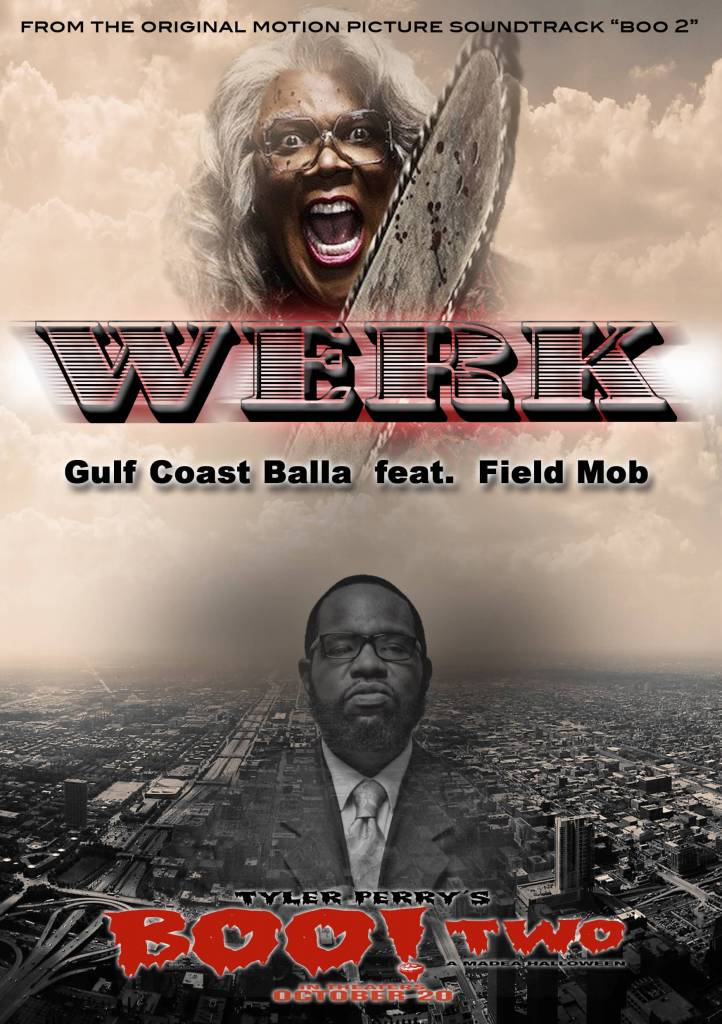 Not too long ago, Southern rapper Gulf Coast Balla made his debut on The DigiSpot with his new single "Werk". "Werk" appears on the soundtrack for Tyler Perry's new movie, "Boo 2! A Madea Halloween", which is currently in theaters. Following his DigiSpot debut, GCB also took the time out to chop it up with us about the two said topics & more below...

VannDigital: As we’ve posted your recent single “Werk” not too long ago, how was it able to make it onto the soundtrack for “Boo 2! A Madea Halloween”???

Gulf Coast Balla: I have been dealing with placements and licensing for over 10 years, so my music and name are in that circle of musical directors etc. Shout out to Erin Dillon, she is one of the music directors with a long resume, she contacted me and let me know that they were interested in using my song for the movie and the rest is history.

I did not make an appearance physically, but “Werk” is featured in the movie and you can hear the DJ playing it at the Halloween part after Rae Sremmurd performs “Black Beatles.” And with this being the sequel to the first one, I would most definitely be part of the third one in any capacity be it soundtrack again or acting in it.

How were you able to get Field Mob on “Werk”???

That’s family! Shawn and Smoke my brothers. Been rocking with them since 2005. We got long history together. I’ve toured with them and they have put me in a lot good positions and around a lot of people whether it was on the road or at their videos with Ciara, Ludacris and other people of importance. So fast forward and I working on the song, when I finished my verse and the hook I was like, “I ought to put the mob on this….” I hit Shawn and told him I had a banger for them. We caught up soon after and recorded it and now we are here.

We see that you’re associated with the 69 Boyz & T-Pain. How did you make those connections???

I am the road manager for the 69 Boyz. I met Thrill Da Playa in 2003 at a show in Orlando. I was doing my normal networking and getting numbers, I got his and we kept contact. He let me know that he was being offered a radio show in Tallahassee. After the show started, I went up there one day and kicked it on the air and he gave me a job as the co-host. I was now part of Geto Fabulous Live on 100.7 The Beat, the #1 show in the market. From there I still toured with him opening up for shows, and we had maybe 4 club nights during the week. We brought so many acts to the city from Young Buck, 3-6 Mafia, to an up and coming Gucci Mane, who would later return the love by hosting Thrill Da Playa’s “Yo Chevy” video shoot in Albany, GA which also features Smoke from Field Mob. We help so many artists from our platform that our footprint is still implanted in the city and with these artists. As the years passed, I went back to school to get my degree in Marketing Mgmt and I transitioned to the corporate side of the business. I then became their road manager. Thrill and I also share the same birthday of September 14, Virgos! That’s my big brother and mentor, he has taught me a lot about this business that would cost the average person at least $100,000 in consultation fees.

T-Pain is one of my best friends in this thang. I met Pain and the rest of the Nappy Headz individually when I first moved to Tallahassee from Pensacola in 2003. I was doing music in their city, so like anything else, you cant go hustle on folks block without approval so I made it a point to find out whose block I was on when I got to Tallahassee and the Nappy Headz was on fire. Pain and I instantly became tight, I think it was because I understood him and knew how to deal with him. And to show you how this all ties together, when Shawn Jay from Field Mob had that freestyle mixtape out that was going bonkers, we were the 3 man team on the road. I was driver/mgr, Pain was hypeman and Shawn was the artist. And later Thrill/Geto Fabulous live would book T-Pain for what would be his first solo show ever during BEAT WEEK for the radio. Pain would let me come record in his home studio the Chevy Shack all day when I needed to. This is the same studio where he recorded “I’m Sprung” and his other early hits. The relationship leveled up after he dropped “Rappa Ternt Sanga.” Now this is the street CD, not his major label debut, that he released on his birthday, September 30, 2004. This CD was amazing! The music was incredible and the style and production was unique and something I had never heard before. I call it “genius simplicity.” I called him one day and asked him when he was going to get some CDs made and bring them to Clippers. Clippers is the barber shop that I cut hair at and is a pillar for music and promotion. I told him people were coming in there looking for it, he didn’t really take it serious. I told him look, I’ll buy the CDs for you so you can see, and I’ll put them for sale and won’t even keep any money. I ordered 500 CDs, and to this day when I order CDs, it still says “T-Pain” on the label because he just uses the same outgoing label because they go to the same address. The CDs sold out…. fast!!! I called him one day and said, you can come get your money. He was like “What money?” I said from the CDs…It was that conversation in which I could hear his expression go from laughs and jokes as usual to a straight business face. He came to the shop in the Cutlass you hear him talk about in his music and we pumped those CDs from that point on. He had his deal by the summer of 2005, “I’m Sprung” came out and the rest is history. He is still one of my best friends, we talk often and anytime I’m in Atlanta I swang by the crib if he is in town, if not I go see his brother and mother. I plan to go holla at him next Saturday in St. Petersburg since I’ll be in the area waiting to go on my yearly cruise.

Will “Werk” appear on any upcoming projects you might have in the works???

“Werk” the single is currently available on all digital outlets like Tidal, Spotify, Amazon, iTunes and the video is on YouTube and stars Shuntel Renay, a multi-talented actress and brand ambassador. It will be on my upcoming project “Pray Laugh Love,” either on the album or a bonus track. Go check the video out and follow my campaign @gulfcoastballa on IG and Twitter and log on to TheKendallE.com for my appearances, stories and new on the Writers Block, and my shirt line and other products I have for sale on the Shop tab…..WERK!